I love seeing customers use my fonts to create something unique, like these monogrammed towels by Lillian Menzies.

“Laura's fonts are just so beautiful and with so many components the possibilities are infinite. For years I had been searching for fonts with the alternate letters and swashes and all, so when I discovered them I was just delighted,” Lillian said. “And when I emailed with a technical question, I received a very helpful and personal reply! Most extraordinary in this day and age.”

Lilian is an accomplished sewist and embroidery artist who began sewing at age 11. She soon began making her own clothes, and even sewed her own wedding dress! She sewed much of her daughters’ clothing as well in their childhood, learning to smock when her youngest was just a year old.

Lillian does much of her sewing from scratch, with an emphasis on vintage children’s clothing. She also buys plain bed linens, towels, napkins, shirts and baby items and embroiders them—usually with monograms.

In 2001, Lillian got her first embroidery machine. Arthritis and trouble with her eyesight had made handwork difficult, but she found machine embroidery offered her a way to continue adding these lovely details to her garments.

She also loves to customize gift bags to match the gifts inside, and uses a Cameo and Brother Scan ‘n’ Cut to do so. After she had monogrammed this set of towels, she used the Cameo to cut an identical letter from self-adhesive vinyl. She also added a decorative graphic and placed this on the gift bag to complement the font of the monogram.

In addition to this project, Lillian said she’s used some of my fonts to create print cards and labels. She’s also incorporating them into a cookbook, a collection of recipes compiled from family members and friends.

Though some personal health trouble—­­­as well as the addition of a new fur-baby (a Golden Retriever puppy named Paddington)—has slowed her down a bit recently, she said she has a number of projects in mind for the future, many of which will include some more of my fonts.

I’m excited to see what she comes up with next! Thanks for using my fonts, Lillian! 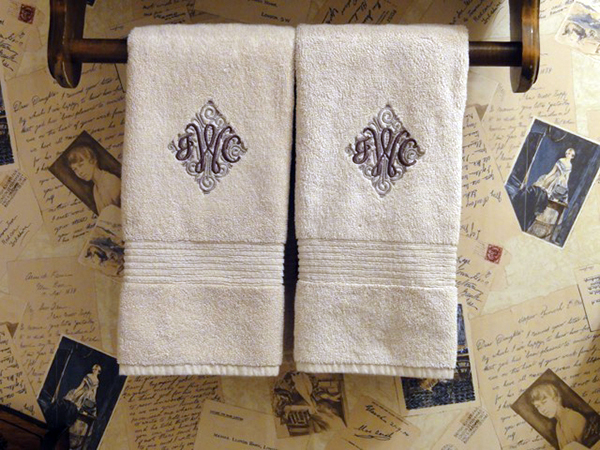