Adventures in Italy and Germany!

June was a busy month! I had the opportunity to speak at several different events, all so great that I just had to share my experiences with you! The first started at the beginning of the month in Faenza, Italy, home for some of the world’s best Sangiovese, at the Kerning Conference! This was the third year of the Kerning Conference and it’s the first international conference in Italy dedicated solely to typography and web typography. 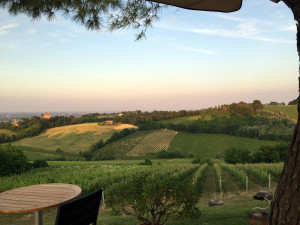 This is the location of the first dinner the conference group had in Italy - amazing view! 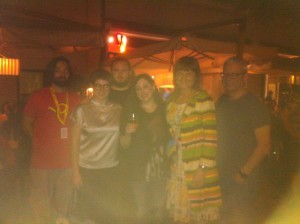 My husband and I arrived in Italy on a Monday and spent that whole first day sleeping…the jet lag was horrible! On Tuesday night, we hopped on a charter bus with about 25 conference VIPs (past speakers, current speakers, those leading workshops, etc.) and had dinner at a fabulous restaurant overlooking the wine valley. The dinner was amazing and I had the opportunity to meet so many welcoming people. 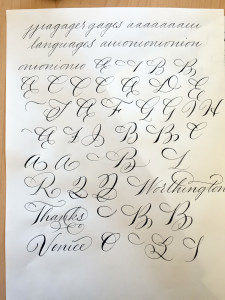 My first attempt at learning the Spencerian hand in a workshop setting. Taught by the talented Master Penwoman Barbara Calzolari.

Friday was the conference and I was the first of eight speakers to take the stage. With over 250 attendees, I was nervous to put it mildly, but was relieved and more comfortable than I would have expected once I took the stage. The whole conference felt like a big group of friends, which went a long way to ease my nerves. 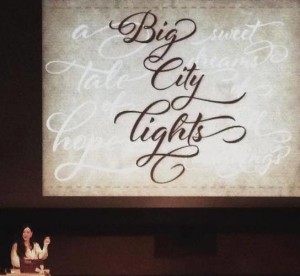 Me on stage! The topic was, "Recapturing the Essence of Hand-drawn Lettering Through Typeface Design"

The conference was extremely well run and all the presenters were so well prepared and more engaging than I would have expected from the often dry and technical typography conferences. Bruno Maag was the headline speaker and was absolutely hilarious. He hit the stage wearing a printing apron we had each received as a speaker gift and started waving around a gigantically scary butcher knife he had found the night before. He found a way to incorporate the knife into his presentation and it was actually relevant and made sense too! Another highlight came when Oliver Reichenstein was on stage and started losing his voice not 5 minutes into his presentation. I say presentation very loosely – he had no script, no slides and was performing like a very seasoned stand-up comedian. I realized his voice wouldn’t hold out, so I ran to a nearby café and got him some tea and Sucrets. I gave them to the MC backstage and both of us decided to deliver them to him on stage in the midst of his presentation. When we walked out, he didn’t miss a beat and thought the whole thing was so funny! 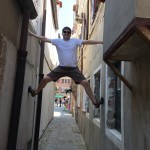 My husband Ken climbing the walls in the labyrinth city of Venice. 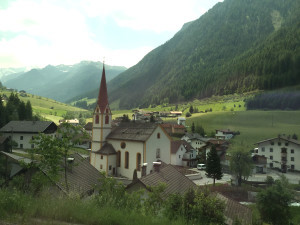 We took the train from Germany to Italy through Austria - here's a pic of a scenic village on the train ride. 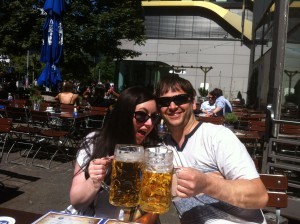 Me and the hubs in Berlin with giant beer steins - Prost! 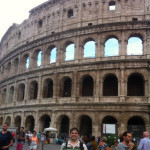 This wouldn't be a complete blog post about my trip to Italy without a pic of the Coliseum!

After the conference ended, we traveled to Rome, Venice and ended our time in Germany. We had a great time, loved the history, visited family but were happy to be home after a busy two weeks.

I must be crazy (you may have already realized that about me), because the night I landed, I spoke at the Adobe Creative Jam in Seattle. I was actually somewhat coherent considering I was onto 30 hours of no sleep! This was one of the most fun and exciting creative event I’ve attended. The energy was awesome and the place was alive with excitement. I was one of 4 speakers and had a blast the whole night. Something that made this event so fun was a challenge that 14 pairs of designers had to solve for. They were given the phrase “opposites attract” and had to come up with a design solution to fit the phrase. These designers went above and beyond including one group who went back to their apartment and staged an entire photoshoot! Live polling allowed us to cast votes for each group and see how the challenge was playing out. Such a fun night!!! 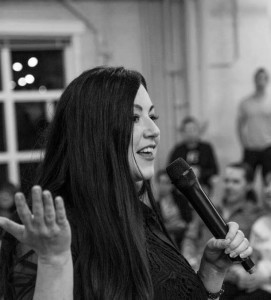 I finally rounded out the month teaching a week long hand lettering class at the School of Visual Concepts in Seattle for students visiting from the Universidad de Monterrey in Mexico. These young designers were some of the best and brightest I’d ever met and I had the privilege of spending the week with them. I taught on the 4 different types of lettering methods – pointed flexible nib pen, loose brush lettering with a Pentel Color Brush, Felt brush lettering with a Tombow marker and flat edged calligraphy with Speedball C2 nibs. 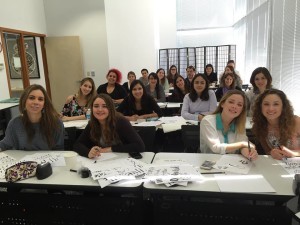 Students from Universidad de Monterrey, Mexico at the workshop I taught for them at SVC Seattle. Only the best and the brightest in this room!

I feel like I’m finally starting to get back to a normal pace of life and have so many exciting things in the works. I can’t wait to share my newest font with you (coming at the end of this month) as well as a special promotion for my newly launched “Fonts at Work” image gallery live now on my website!