Founded in 2010, the Society of Typographic Aficionados’ Catalyst Award is given to a person 25 years of age or younger who “demonstrates significant achievement and future promise in the field of typography.”

At the cusp of her career, French typeface designer Roxane Gataud is already proving to be a catalyst within the type industry, demonstrating immense talent and innovation.

This summer, a panel of renowned and experienced judges selected Roxane from a pool of talented young designers. The award, presented at TypeCon 2016: Resound in Seattle, is a distinguished and well-deserved honor.

For this reason, as well as my passion for supporting burgeoning creatives, I was ecstatic when Delve Withrington, a SOTA board member, asked me to design the award certificate. Each year, the certificate is designed by a type designer local to the TypeCon area; next year, the conference will take place in Boston.

Before I settled on a design scheme, I did a bit of research on Roxane to get a better sense of her work and her personality. This included reading up a bit on her education and work history, and doing a bit of light, amicable internet stalking—I sent her a friend request on Facebook and she kindly accepted.

“That was when I knew I wanted to design typefaces for my own projects instead of using existing ones,”

Roxane’s interest in type design was piqued while attending the École Estienne School of Paris; she went on to earn a master’s in graphic design at the École Supérieure D’Arts Appliqués in Bourgogne, France, and a post-graduate degree in typeface design from École Supérieure d’Art et de Design in Amiens, France.

Though type was always a focal point of Roxane’s work, she decided to pursue a career as a professional typeface designer when working on a graduate project which involved designing a book of poetry using both Latin and Arabic scripts. Through this endeavor, Roxane recognized there was no “satisfactory pairing” between the two typefaces.

“That was when I knew I wanted to design typefaces for my own projects instead of using existing ones,” she said in an interview for Typecon.

In this well of inspiration Roxane dipped her pen, and soon created her first typeface, the critically-acclaimed Bely, released through the type foundry Type-Together.

Type-Together wrote in their description of Bely, “it is a high-class throwback containing four text weights which were built upon classical proportions to capitalize on reading familiarity.”

Bely truly is a work of art; and in designing Roxane’s award certificate, I wanted to ensure a work befitting of this stellar typeface and of its creator.

Looking through some of Roxane’s posts and photos on Facebook and Twitter, I noticed that in addition to design, Roxane is an ardent collector of fruit labels/stickers, pictures of type in the wild and patterns. And if there is one thing Roxane likes more than typography, it’s probably dinosaurs. Based on this, I knew I wanted to add a dash of fruit and a pinch of prehistoric flavor into the mix.

I also noticed that she always has her nails painted in red, rose, pink or peach tones, and decided to use these as the core color palette for the design.

Roxane has an affinity for vintage Parisian tiles, so I incorporated a pattern based on this style. I added the art deco sunrise image based on the etymology of her name, which means dawn or sunrise.

And as for the type, I wanted to keep it simple so as not to interfere with the intricate border. I noticed Roxane particularly likes high-contrast serif fonts, so I selected that style for her name and used a mono-line style for the script to match it.

Once I’d concocted a mental image of the piece, I sketched out the design on my iPad Pro in Procreate, using my Apple Pencil. From conceptualization to complete sketch, this portion of the process took about 30 hours. I chose to do it this way because I was concerned that sketching it out in pencil would end up being too messy, there'd be a lot of erasing and I wanted the flexibility of being able to resize and move around elements of the design as I was working on it – something you can't do with traditional paper and pencil. As you can see, I didn't finish the sketch of the dinosaur or fruit; I planned to stipple these details in and so it became unnecessary to do that to the digital version as it wasn't a compositional element as the other portions were. 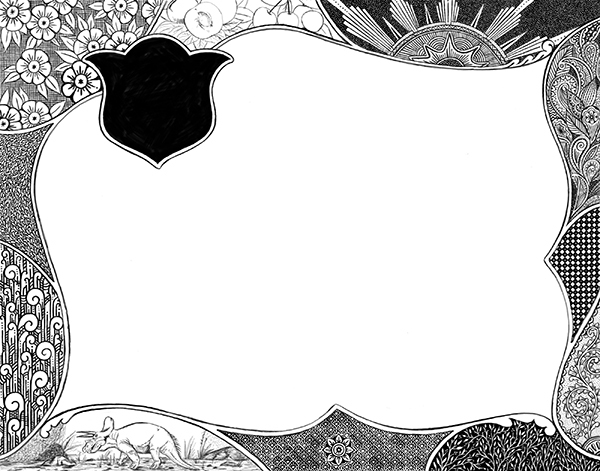 When considering how I was going to design this, and knowing that I'd be producing this all by hand, I was concerned about messing something up. What if my cat, Bailey, jumped on my drafting table while I did this and mess something up? (He did jump up on the table – on more than one occasion!) What if I accidentally spilled a drink all over it? What if I smudged it or just simply made a mistake? All of these thoughts occurred to me before I set upon designing this and that led to the decision to design the certificate in panels. I figured that if something tragic happened (it didn't for the record, but it very well could have!) I could cut a section of it out and replace it with a fixed section that no one would notice unless they were to carefully inspect it.

I then printed it and put it on a piece of Arches paper (a favorite amongst calligraphers) over the top of the print-out. Using a light box and magnifier, I traced the original sketch with Pigma micron pens. I used a tiny paintbrush and pearlescent paints and gold shell paint (24 karat gold mixed with a binding agent) for the colors. This process of hand-painting took about 20 additional hours. 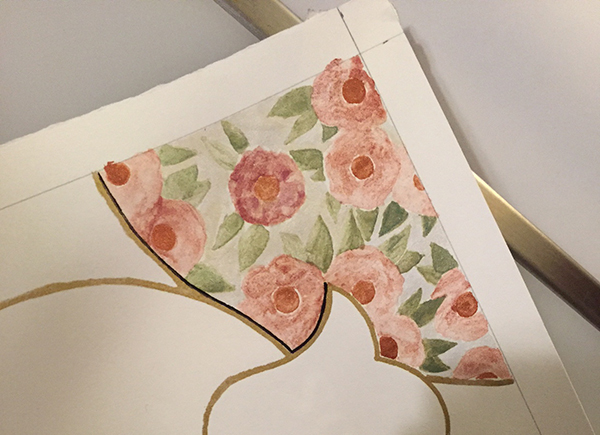 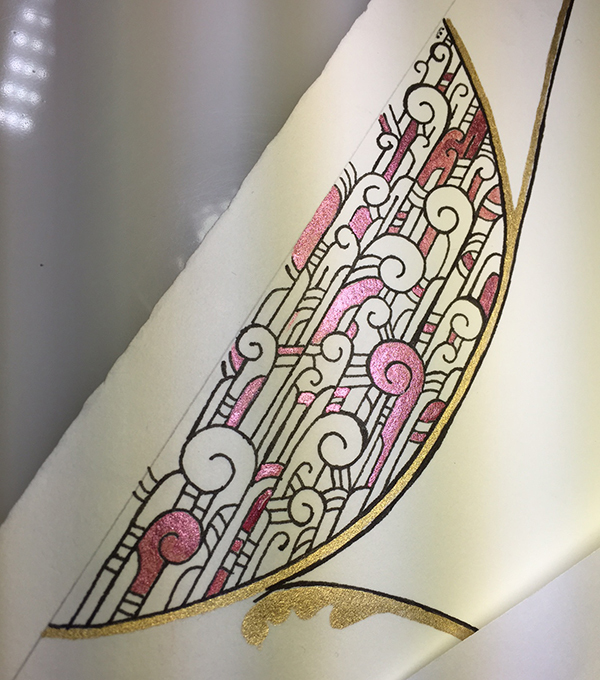 The 50 hours of work was well worth the effort, especially when I met Roxane in person and discovered she was even more wonderful than I had imagined! She is an absolute sweetheart and completely authentic, just as she portrays herself online. She charmed everyone at TypeCon, captivating all not only with her hard work, dedication and talent; but her friendly, sweet and down-to-earth personality. It was such an honor to design this certificate for someone so deserving! 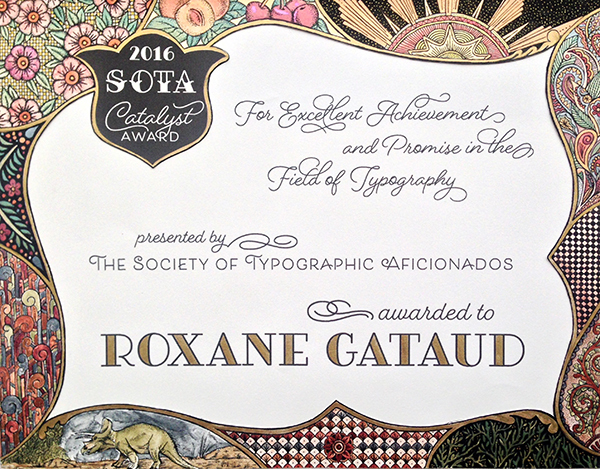 Roxane was kind enough to write an article about the certificate as well, if you'd like to read her response to it here!